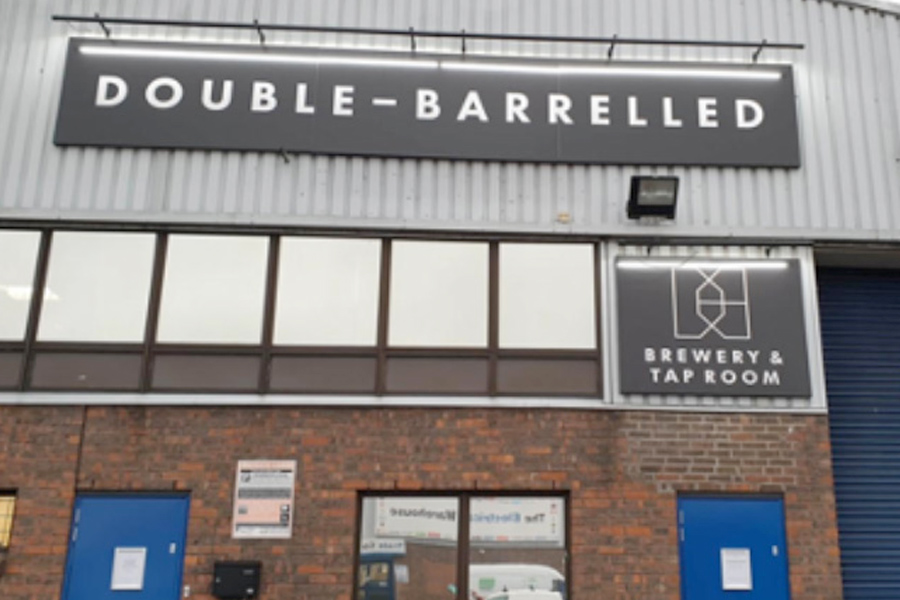 During that intervening period, I exchanged several emails with Mike, and I became increasingly excited with the passion that he had for the project, as well as with the scope of his plans!

When the Brewery finally opened, followed by the Taproom a few weeks later, I was there on opening night, and I have been a regular visitor ever since.

I think it fair to say that Double-Barrelled secured a “generously” sized industrial unit, which gave them plenty of scope to build and expand the brewing operation, whilst still be able to devote a serious amount of square footage to the Taproom. The Taproom can seat perhaps 80 people indoors, without feeling at all crowded. When weather permits, tables are also available out the front, where most Saturdays there is a food truck parked.

I would have been a huge local supporter of Double-Barrelled even if their beers had turned out to be mediocre, because I welcome their business to Reading and I just love to hang out in cool Taprooms! However, it turns out that these guys really know what they are doing, and they have established a strong nationwide UK reputation from a standing start in less than 18 months.

The Taproom has 12 keg lines, which are typically pouring 6 or 7 of their own beers, as well as carefully selected mix of UK, European and US guest kegs. The style balance is always well-maintained, with 3 or 4 Pales/IPAs, several sours, a range of dark beers, and one or two less obvious styles.

In addition to the draft lines, there is an impressive wall of fridges, which stock a wide range of house beers, as well as many of the leading UK Breweries. It is worthy of note that there is no corkage fee to drink cans on the premises, and the prices always strike me as being on the low side of average, which is much appreciated!

During last winter, it is fair to say that the Taproom suffered from being rather cold. No such problems this year however, as they have installed a gargantuan industrial heater on the front wall that could heat most of West Reading, if required!

One quite remarkable feature of the Brewery are the bathrooms, which are undoubtedly the cleanest and freshest of any public facility I have had the pleasure to use, anywhere in the World!

The Double-Barrelled Taproom is a particularly friendly and welcoming place to while away a few hours.